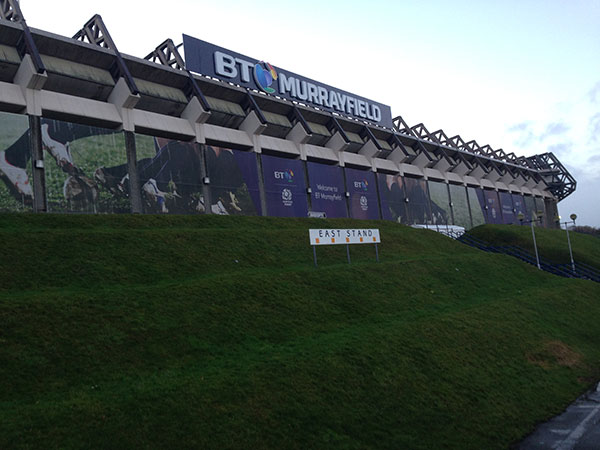 Five years ago BD Print were invited to brand Murrayfield Stadium after they announced the new stadium sponsors, BT.

This included the main stadium signage at a massive 30 metres in length on both the North and East stand, internal signage on the stadium roof, stairwell directional signage and a run of 23 banners along the East Stand frontage.

Recently BT have rebranded and we were delighted to be tasked with updating all of the existing elements to incorporate the new logo. No mean task when some of the logos are over five metres in diameter and over one hundred feet up in the air.

During the signage rebrand we’ve had to add in over a ton of new structural steel, replace over five thousand LED’s and seven hundred metres of new cabling. Much of the existing signage was removed, refurbed and reinstalled with only the additional elements having to be made from new. A great achievement for signage that’s exposed to the worst of the Scottish weather every day for over five years.

This website uses cookies to improve your experience while you navigate through the website. Out of these, the cookies that are categorized as necessary are stored on your browser as they are essential for the working of basic functionalities of the website. We also use third-party cookies that help us analyze and understand how you use this website. These cookies will be stored in your browser only with your consent. You also have the option to opt-out of these cookies. But opting out of some of these cookies may affect your browsing experience.
Necessary Always Enabled
Necessary cookies are absolutely essential for the website to function properly. This category only includes cookies that ensures basic functionalities and security features of the website. These cookies do not store any personal information.
Non-necessary
Any cookies that may not be particularly necessary for the website to function and is used specifically to collect user personal data via analytics, ads, other embedded contents are termed as non-necessary cookies. It is mandatory to procure user consent prior to running these cookies on your website.
SAVE & ACCEPT